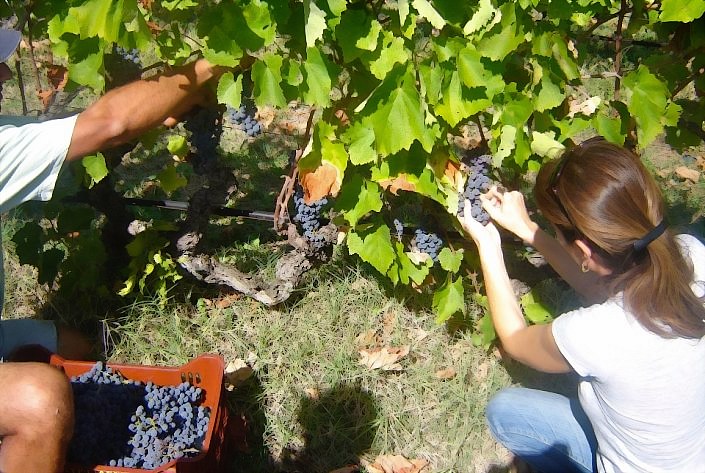 Greek wine has its roots in antiquity, as ancient Greeks began to make wine as early as 13th century BC. They were the first to create special legislation concerning wine in the 5th century BC and they were also the first to notice that certain areas make better wine than others.

When someone thinks of Greece, the image of Santorini’s spectacular sunset and white and blue views comes into mind. But Santorini is also the motherland of the famous variety of Assyrtiko. The variety can also be found in other parts of Greece, but the volcanic soil of Santorini makes it more special.  It mainly produces dry white wines, some aged in oak, but also, a number of sweet wines are made as well.

One of the most famous Greek wine grape varieties, is also a grape of the PDO Nemea, known worldwide for the wine production and the beautiful scenery. This amazing red variety took the name from Agios Georgios (Saint George), Agiorgitiko produces deep red wines full of gooseberry and blackberry flavors, and a rich and mature texture. It can be drunk either as a young, unoaked red wine, or as matured in oak for at least a year.

Savatiano is one of the most historic white Greek grape varieties. grows mainly in the Athenian region, Attica. Almost abandoned decades ago, it’s now one of the most widely planted varieties thanks to new passionate winemakers. Savatiano offers fruity and flower aromas such as peach, green apple and jasmine.

One of the most characteristic red grape varieties of Greece, Xinomavro means xino(sour) and mavro (black). Grown mostly in Northern Greece, especially in Naousa (PDO) and Amideo (PDO), is described as a brutal and demanding variety. Offers an intense color, high acidity, rich aromas and thick tannins.

Robola is a famous white grape variety grown mainly in Cephalonia island (PDO). Its a wine famous for its fruity aromas, especially citrus, peach and green apple and the characteristic minerality o the area. Robola wine is usually consumed fresh and un-oaked but they also have  3-4  years aging potential.